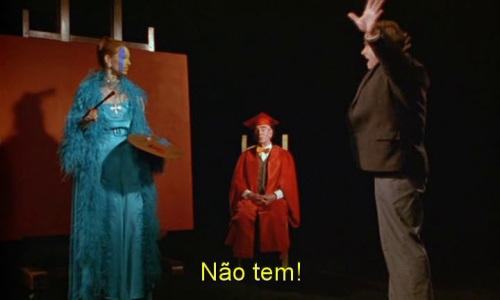 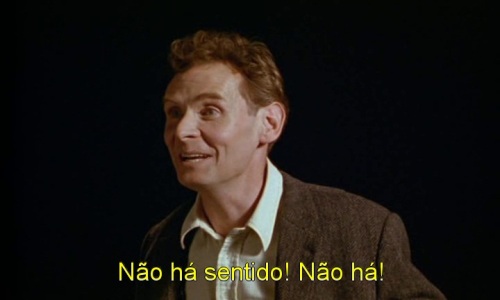 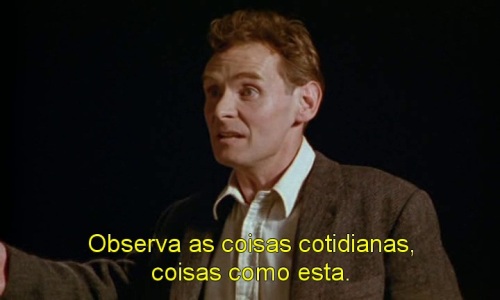 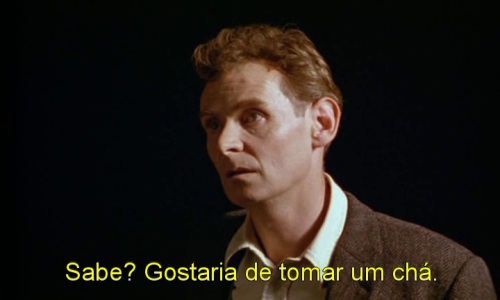 Jarman may take on the Wittgenstein script only to distance himself from his subject, but Wittgenstein also leads to a crisis in Jarman’s own aesthetic sensibility. Jarman likes to assemble cinematic elements through half-conscious and seemingly random association. For example, when the narrator tells us of Wittgenstein’s going to Manchester University to study aeronautics, the visuals show us: “Older Wittgenstein wearing kite wings picks up two lawn mower sprinklers and holds them out like the propellers of a plane. The light catches the swirling water like a Catherine wheel”. This is a delightfully weird image, and Jarman’s description exactly underlines his interest in light on water. It has not been noticed, however, that this picture has been stolen directly — as a poet steals — from an analogy in Ray Monk’s biography of Wittgenstein:

Though still convinced he had neither talent nor taste for aeronautical engineering, Wittgenstem persevered with his attempts to design and construct an aircraft engine. Plans of his proposed engine survive, and show that his idea was to rotate the propeller by means of high-speed gases rushing from a combustion chamber (rather in the way that the pressure of water from a hose is used to turn a rotating lawn sprinkler).

We are familiar with this kind of associationist logic from any number of Jarman’s films, from what we know about how images got onto the screen and how they were edited together.
But Wittgenstein provokes a crisis in Jarman, a crisis around the ideas of depth and surface. Poetic links and associationist logic are mysterious, deep, difficult to trace, only partly legible. The sphinx, the magician, John Dee’s hieroglyphics, Prospero’s symbols, even the graffiti in Jubilee all point toward a language only partly understood by ordinary means. Even the cover photo for the Eagleton and Jarman scripts, which was widely reproduced, shows us Wittgenstein as a kind of Prospero figure who stands before a blackboard covered with German phrases, marks, and erasures, which must surely imply, altogether, great power of thought.
Yet Wittgenstein’s rigor often leads him to question these metaphors of depth, to deconstruct (to use a later vocabulary) the surface-depth distinction. The many discussions of transparency in Wittgenstein’s Remarks on Colour can only complicate enormously the conventional usages of “surface” and “depth”:

In the cinema we can sometimes see the events in the film as if they lay behind the screen and it were transparent, rather like a pane of glass. The glass would be taking the colour away from things and allowing only white, grey and black to come through. (Here we are not doing physics, we are regarding white and black as colours just like green and red). – We might thus think that we are here imagining a pane of glass that could be called white and transparent. And yet we are not tempted to call it that: so does the analogy with, eg, a transparent green pane break down somewhere?

Remarks on Colour is built out of these brilliantly difficult paragraphs that stare remorselessly at the ways we talk about color, its properties and elements, its grammar. To a filmmaker utterly absorbed — one might say saturated — in thoughts about color, whose favorite British director is the equally color-obsessed Michael Powell, these unfoldings and dissections of the language of color can only leave a powerful impression.
In Monk’s description, Wittgenstein’s objections to meta-theories lead to a poetical way of thinking, to a process of thought that is, indeed, associationist at heart:

After the fog had cleared there could be, for Wittgenstein, no question of meta-theories, of theories of games. There were only games and their players, rules and their applications: ‘We cannot lay down a rule for the application of another rule.” To connect two things we do not always need a third: “Things must connect directly, without a rope, ie, they must already stand in a connection with one another like the links of a chain.” The connection between a word and its meaning is to be found, not in a theory, but in a practice, in the use of the word. And the direct connection between a rule and its application, between the word and the deed, cannot be elucidated with another rule; it must be seen: ‘Here seeing matters essentially: as long as you do not see the new system, you have not got it.” Wittgenstein’s abandonment of theory was not, as Russell thought, a rejection of serious thinking, of the attempt to understand, but the adoption of a different notion of what it is to understand — a notion that, like that of Spengler and Goethe before him, stresses the importance and the necessity of “the understanding that consists in seeing connections.”

In addition to descriptions like this, Jarman would have read in Monk’s biography Wittgenstein’s comments on deep magic, and of his impatience with Frazer’s The Golden Bough for trying to explain everything: “The wealth of facts which Frazer had collected about these rituals would, Wittgenstein thought, be more instructive if they were presented without any kind of theoretical gloss and arranged in such a way that their relationships with each other — and with our own rituals — could be shown”. Jarman’s immersion in Wittgenstein may have been intuitive, selective, critical, and self-seeking, but it leads to a substantial change in his own aesthetics. In Wittgenstein and Blue Jarman seems to learn another name for poetry. Jarman learns that an associationist manner of proceeding is not necessarily to be imaged as a sphinx, aligned with mystery and all things strange. Instead, poetry might be aligned with transparency. Coming to Wittgenstein causes Jarman to refigure, rename, and resee what poetry is, and Wittgenstein, Chroma, and Blue all reflect this knowledge.

Derek Jarman and Lyric Film: The Mirror and the Sea (Steven Dillon)