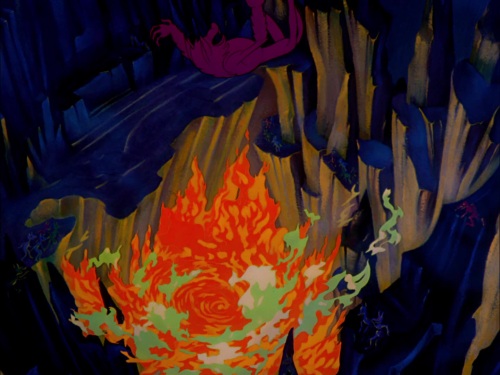 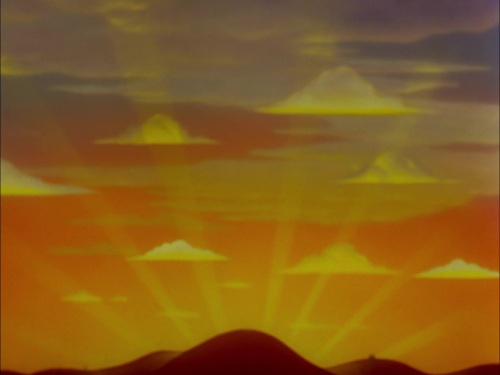 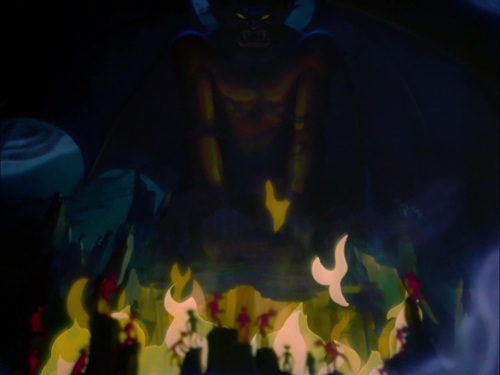 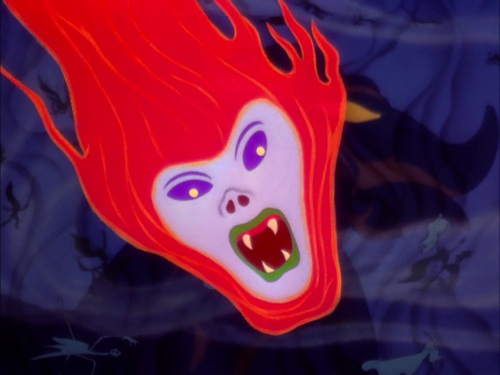 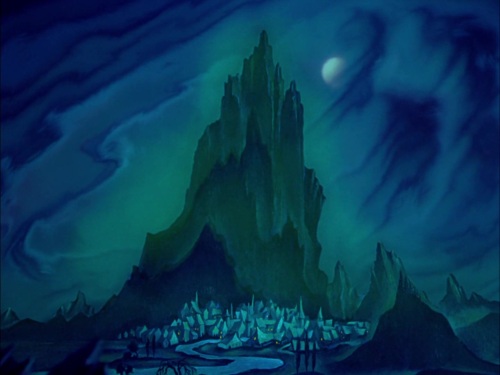 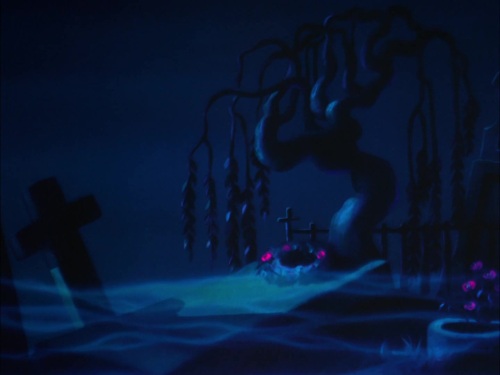 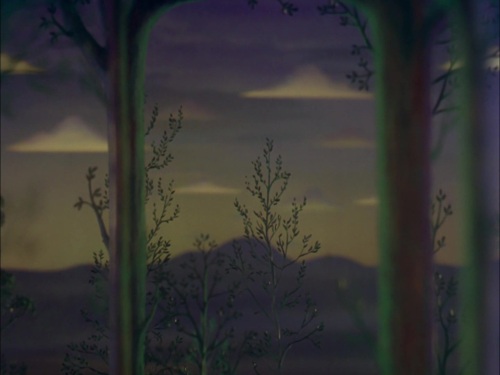 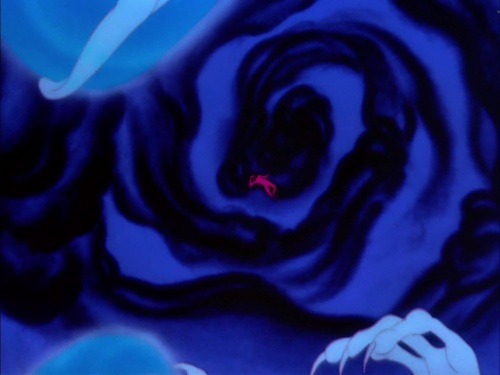 The Last Number in Fantasia is a combination of two pieces of music utterly different in construction and mood, whose synergism was intended as a dramatic example of the struggle between the profane and the sacred. The first is Night on Bald Mountain, a tone poem by Modest Moussorgsky. The second is Ave Maria, by Franz Schubert. In this arrangement, the end of the first piece blends without pause into the second, so that the bells heralding the morning in Night on Bald Mountain seem to be the bells calling the faithful to worship in the Ave Maria.
Moussorgsky first sketched Night on Bald Mountain in 1860 for solo piano and orchestra, then rewrote it in 1868, 1871, and 1875. It was never performed during the composer’s lifetime. In 1882, Moussorgsky’s friend Rimsky-Korsakov revised and reorchestrated the work and conducted that version at its first performance in 1886. It was the Rimsky-Korsakov arrangement that Leopold Stokowski recorded for Fantasia in 1939, but when Irwin Kostal conducted the digital rerecording of the Fantasia sound track in 1982, he used Moussorgsky’s own, more savage orchestration. The German lyrics for Schubert’s song were translated from Sir Walter Scott’s The Lady of the Lake. The English text was written especially for Fantasia by Rachel Field.
Bald Mountain is Mount Triglaf, an eminence near Kiev in southern Russia. Here, according to Slavonic mythology, evil spirits gather on Walpurgis Night, the equivalent of our Halloween, to worship the devil. The pattern of the music and the animated pictures is the pattern of the Witches’ Sabbath itself. First, Chernobog, the god of evil and death, appears out of the top of Bald Mountain. He gathers to him the evil ones — witches, demons, vampires, and the skeletons of corpses not buried in consecrated ground. They dance furiously as his Satanic majesty condemns them, by giant handfuls, to the fiery pit inside the mountain. It is his perverse pleasure to transform some of these demons into animals before throwing them into the flames, and he is reaching for more evil ones to play with when the bells heralding the morning drive the ghosts back to their graveyard, the evil spirits back to the town, and the cringing Chernobog back into Bald Mountain.
These same morning bells that make the devil fold his wings around himself and again become a mountaintop call the faithful to the worship of the God of Love. A procession of figures carrying lights is seen faintly through the drifting morning fog at the base of the mountain. The procession crosses a bridge, their lights reflected in the water below. As the solemn file ascends a hill, gothic tree forms emerge from the fog, suggesting the sanctuary of a church. The procession passes along the edge of a quiet pool. In the distance, we see a pulsating light that gradually assumes a form suggesting a cathedral window. The camera glides through the window, comes out into a predawn sky, and a sunburst fills the sky with color as the choir sings the last chords of the Ave Maria.

“I’m Ukrainian,” said Tytla, a gentle New Yorker whose black mustache made him look like a fierce Cossack. “My father was a Ukrainian cavalryman. On all my animation I tried to do some research and look into the background of each character. I studied Italians for weeks to do Stromboli. But I could relate immediately to this character. Ukrainian folklore is based on Chernobog. Moussorgsky used terms I could understand.”
The Disney version of Night on Bald Mountain follows losely the program appended to the original printed score of Moussorgsky’s tone poem: “A subterranean din of unearthly voices. Appearance of the Spirits of Darkness, followed by that of Chernobog. Glorification of the Black God. The Black Mass. The Revelry of the Witches’ Sabbath, interrupted from afar by the bell of a little church, whereupon the spirits of evil disperse. Dawn breaks.”
The Disney visualization of Chernobog, however, sprang from an inspirational pencil sketch by Albert Hurter. Hurter, a middle-aged Swiss bachelor who had been an animator on Mutt and Jeff in the twenties, never animated for Disney. But he had a fantastic visual imagination, expressed entirely in pencil sketches, so Disney paid him to sit by himself all day and fill sheet after sheet with drawings that would inspire Disney’s other artists. “The demon on top of Bald Mountain was his idea,” said story director Dick Huemer. “A simple pencil sketch showing the demon up there unfolding his wings suggested the whole thing to us.”
To design his Witches’ Sabbath, however, Walt Disney went outside his Studio for talent and hired Kay Nielsen, one of the finest contemporary illustrators of myths and fairy tales. East of the Sun, West of the Moon was probably his best-known work. Wilfred Jackson, who had directed one of the greatest Disney cartoon shorts, The Band Concert, directed the segment. Jackson shot live action of Bela Lugosi, the screen’s famous Dracula, for Tytla to study for the movements of the devil. But the way that Lugosi unfolded his “wings” and gestured was not the way that Tytla saw those movements in his imagination. So after Lugosi left, Tytla had the skinny Jackson bare his chest and move the way that Tytla directed him to move for the motion picture camera. “I even did the hocus pocus thing with the little guys on my hands,” said Jackson, alluding to Chernobog’s fistfuls of flames that changed into demons and beasts. Looking at this live action, at three-dimensional models of Chernobog that the Character Model Department had sculpted, and deep into his imagination, Bill Tytla animated the devil.
“It was one of the greatest things I’ve ever seen in my life,” said Marc Davis, himself one of the finest draftsman/animators in the history of the art. “I think that was the high point. The whole thing comes to life. The moment of fear when the bell begins to toll stands out, but I like the shape of this whole thing. It was enormous.
“But, you see, this could only happen at the Disney Studio — because it wasn’t only Bill. You had Kay Nielsen, who sketched this thing up. And it was pretty much as it was on the screen. You had sculptors who made models.”

In an early story conference that dealt with ombining Night on Bald Mountain with Ave Maria, Walt Disney said, “The forces of good on one side and of evil on the other is what I’m trying to see in this thing.” Deems Taylor described the procession in the Ave Maria as “a vast host of worshippers” of the God of Light, in contradistinction to the worshippers of the Prince of Darkness on Bald Mountain. “On moves the procession, on and on,” he wrote, “until we reach the end and emerge in a blaze of morning light. Once again the powers of life and hope have triumphed over the hosts of death and despair.”

Chernobog (Chernabog, Czernobog, or Tchernobog) is the black god of death and darkness in Slavic Mythology, a pre-Christian, pagan, dualist belief system, consisting of two main deities, Bylebog (Bielebog) a benevolent god of light and Chernobog, the malevolent god of night. The Slavic people are the ethnic group who reside in the modern day areas of Eastern Europe such as Russia, Czechoslovakia, Yugoslavia and Romania (former Transylvania). Like most early, pagan, European mythologies, ancient Slavics believed these two divine beings had control over their lives. In Slavonic myth these early rites and rituals were based on the principle that the natural world is inhabited and controlled by both beneficial and harmful spirits of nature. Later, these forces were anthropomorphized into divine beings who possessed special powers and functions. The supreme god of the East and South Slavs was Perun, god of lightning and thunder, who controlled the elements of nature. Svarog, known to most Slavs, was regarded as the father of the deities: Byelobog (the White God, good) and Chernobog (the Black God, evil and death).
These gods represented the forces of good or evil and reflected the Slavic belief in the dualistic nature of the universe. The Baltic Slavs had a particularly rich tradition and many cults, including the powerful Radogost-Svarazic. With the coming of Christianity, the great divinities of the Slavs vanished in name, but many elements of pagan belief survived in popular tradition and in many Christian Slavic religious ceremonies.
According to legends and myths of the Slavic pantheon, Belobog, the force of orderly creation fought with Chernobog which caused the world to come into being. The gods and goddesses of this belief were believed to be of an adopted or assimilated Iranian belief system. Because of his negative aspects, Chernobog is often associated with other deities like the Black Serpent and Koschei.

– Other pronunciations of Chernobog: (Chernabog, Czernobog, Chernevog, Czernobuh, Zcernoboch):
The name is spelled differently according to the specific Indo-European Slavic language:
Crnobog or Pya – South Slavic Crno “black” and Bog “god”, pronounced Tser-nah-bog, can rhyme with There-are-not. Chernobog: in Latin characters, transliterated from (An alphabet derived from the Greek alphabet and used for writing Slavic languages) Cyrillic. Czarnobóg: in (The property of being smooth and shiny) Polish, pr. char-NOH-book
“He is also known as the God of Chaos and Night and as the Black God of the Dead, ruler of Nav, son of Zmey, husband of Morena. He is strongly associated with Koschey as one of his incarnations or just an epithet (Black God Koschey). Calling Koschey by name was bad luck, thus only the epithet was left.” (Crnobog)
The nuclear reactor disaster of Chernobyl in Ukraine in 1986 (recently shutdown), which released radiation killing and injuring thousands, is derived from the word Chernobog (Chernabog) and Byelo-bog, and in a way is symbolic of the tragedy. The Russian Cherno is derived from the Sanskrit Krishna, meaning the “black one” and the adjective cherny means “black”. This name is in turn derived from the Ancient Egyptian, kemet, meaning the Black Land. And the word -bog is Slavic for ‘god’. The 1983 book on “Fantasia” by John Culhane refers to Larousse Encyclopedia of Mythology: “Ukranians still say, ‘May the black god exterminate you.’ “